Some reflections from the Lone Star State.

Sure enough, at the rate the Dems and BHOzo are shooting themselves in the foot (and  turning erstwhile supporters into foes) the best way you can do is to interfere with that as little as possible. Even the “last argument of the [naked] king”, the race/bigotry card, is losing its sway over the people.

But is “we suck less than the other guys” really a winning strategy?

The Tea Party movement seems to be a leaderless movement based around a few general principles (a return to limited government, throw out Democrat and “Dem-lite” incumbents alike, …) This is its strength and its weakness alike.

The GOP establishment, for that matter, seems to be running around like a headless chicken. Some see the Tea Party as a threat to their own personal perks: Dan Riehl on many occasions expressed his frustration with professional politicians who are not necessarily unhappy with the GOP being in the minority as long as they enjoy perks and easy money. (Nor, shall I add, is the phenomenon of “America’s Ruling Class” limited to the Dems. I am sure some “Country Club Republicans” would rather see the GOP lose than “the wrong kind of people” being catapulted into office.)

Others realize (rightly) that any GOP insider involvement with the Tea Party movement would just be messing up a good thing, and decide that when they can neither lead nor follow it is best to stay out of the way.

Yet others seem to be in the following mode: “Let’s see what we have to work with in November, then we’ll come up with a plan”. This is too close for comfort to the “1. Make Internet startup company. 2. ?  3. Profit!” strategy. It is also quite unlike the November 1994 takeover of Congress, fueled not just by voter discontent but also by a clear message (Newt Gingrich’s “Contract with America”). The closest the GOP has to a Gingrich (regardless of the man’s personal flaws) this time around is Paul Ryan, and his message is at best half-hearted.

Don’t get cocky, guys. Any victory that is less than crushing will be spun away by the Dems and the lamestream media (88% of whose campaign contributions went to 0bama in 2008). We don’t just have to win: we have to win so big that they can’t ignore it. And this, I am afraid, will require more than just saying “we suck less”.

Most people who hear the name Aerosmith think of classic hard rock tracks like “Walk this way”, but for me, hands down the best song Steven Tyler ever wrote was the atypically sensitive ballad “Dream on”, which became the band’s first single and (minor) hit.

The late lamented Ronnie James Dio, supported by Yngwie Malmsteen on guitar, laid down a cover version that, if anything, outdoes the original. Below is a video. The lyrics can be viewed here.

I’m no big fan of Tom DeLay, but he’s got this one right.

Zombie, in “The Obama-Piven Strategy.”, basically proposes that 0bama is hopelessly torn between a liberal-left “tax and spend” strategy and a looney-left Cloward-Piven strategy, and as a result ends up mostly idling in place. Go read it all. 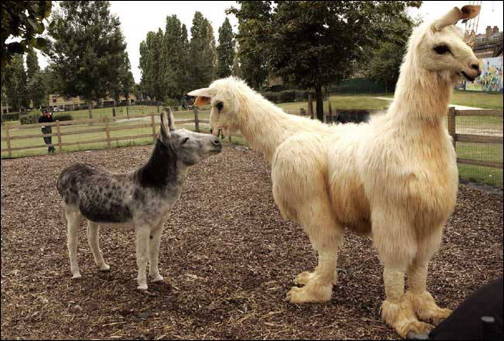 From Zombie’s article: the “Pushmi-Pullyu” two-headed lama talking to the Keynesian donkey.

via American Thinker: Clarice’s Pieces: From Cordoba to Marbella gives an excellent summary of the insanity of the past week, from Marie-Antoinette 0bama’s Marbella trip to tge Ground Zero mosque, and everything in between. Zjust about the one thing missing is the fire-sale of Newsweek to the husband of Rep. Jane Harman.

Light blogging continues here as, in realspace,we wrap up a relocation to a new assignment.

If you’ve been following any of the controversy around the Shirley Sherrod, Zombie’s latest will make your head explode: Slave-labor conditions at Sherrods’ farm?.

Shocking new allegations against Shirley Sherrod (the USDA employee recently embroiled in a controversy over a speech she gave to the NAACP) and the communal farm she ran with her husband Charles Sherrod have been confirmed by an article published 36 years ago in a farm workers’ newspaper.

• Paying farm workers as little as 67¢ per hour, far below minimum wage for the era.
• Employing underage children to perform hard labor.
• Compelling their employees to work in unsafe conditions, including getting sprayed with pesticides.
• Firing any workers who acted as whistleblowers.
• Forcing employees to work overtime in the fields at night with practically no advance notice.
• Having a capricious payscale under which employees doing the exact same jobs were paid different amounts according to the whims of the managers.
• Being unwilling to address the abuse even after it was raised by union representatives.
• Seriously mismanaging the farm to such an extent that it went bankrupt.

Let’s first look at the new allegations, and then at the original allegations.

The irony is that Shirley Sherrod baselessly accused Andrew Breitbart of wanting Blacks to get “stuck back in the times of slavery,” when in fact it was Sherrod herself who was practically enslaving poor Blacks on her farm.

Read the interview here. it is an excellent primer, or refresher for that matter, on the Arab-Israeli conflict.

Blogging will continue to be a bit light as we settle into our new digs and assignment in the Lone Star State. Howdy, y’all!