Commenter “buzzsawmonkey” posted the following in a discussion on PJMedia. Agree or disagree, the metaphor is rather colorful.

“The Republicans are what Orwell called “a permanent and pensioned opposition.” They are the inflatable doll in the passenger seat that enables the Democrats to drive in the carpool lane.

More properly, they are the Palooka Party. They see their role as taking dives for the Democrats for the guaranteed short money, as a palooka fighter in a 1930s pulp-fiction story would take a dive for [the] kid being groomed by the gambling syndicate for a shot at the title. The Republicans’ job, as palookas, is to make it look good—put up a flurry of opposition before getting showily knocked out in the sixth round.

Mitch McConnell and Paul Ryan don’t want to govern—nor do the other palookas in their party who voted to put them where they are. They want to go back to the safe business of taking dives for the guaranteed short money.”

The last sentence echoes this quote from the movie “On The Waterfront” (1954):

Terry: It wasn’t him, Charley, it was you. Remember that night in the Garden you came down to my dressing room and you said, “Kid, this ain’t your night. We’re going for the price on Wilson.” You remember that? “This ain’t your night”! My night! I coulda taken Wilson apart! So what happens? He gets the title shot outdoors on the ballpark and what do I get? A one-way ticket to Palooka-ville! You was my brother, Charley, you shoulda looked out for me a little bit. You shoulda taken care of me just a little bit so I wouldn’t have to take them dives for the short-end money.

Charlie: Oh I had some bets down for you. You saw some money.

The word “palooka”  appears to have been coined in the 1920s by Variety sports writer Jack Conway, as a term for “a mediocre prizefighter”. Wikipedia (caveat lector) claims it was derived as a kind-of spoonerism from the ethnic slur “Polack”. However, the talk page for the article suggests a much more plausible etymology: the Italian word pagliuca (a Southern dialect diminutive of paglia=straw or chaff), i.e. “little straw [guy]”. It’s hardly a stretch to assume that Mafiosi engaged in match-rigging would have referred to the designated loser as a pagliuca —which an English speaker unfamiliar with Italian would have transliterated as something like palooka.

A more modern form of “designated loser” would be the Washington Generals against the basketball exhibition team, the Harlem Globetrotters. Indeed, that very metaphor can be found online in a US political context, in both directions.

And yeah, I’m a sucker for anything in Db or its relative minor Bbm…

Yes, make no mistake. This isn’t about justice for any actual, real-life people. This is about balkanizing into a welter of intersecting oppressor-oppressed distinctions so complex that only an anointed elite can dispense justice.
Stripped of its mask, it is Nietzschean “Wille zur Macht” (will to power), pure and simple.

Here is my choice:
“You can choose from phantom fears/And kindness that can kill
I will choose a path that’s clear/I will choose free will”

“Secrecy is the keystone to all tyranny. Not force, but secrecy and censorship. When any government or church for that matter, undertakes to say to its subjects, “This you may not read, this you must not know,” the end result is tyranny and oppression, no matter how holy the motives. Mighty little force is needed to control a man who has been hoodwinked in this fashion; contrariwise, no amount of force can control a free man, whose mind is free. No, not the rack nor the atomic bomb, not anything. You can’t conquer a free man; the most you can do is kill him.”

When I was six, I found out that my parents could yell, they could threaten, but they couldn’t actually, physically, get in my brain and make my body do things.  This…

I had an interesting discussion with the Beautiful but Evil Space Mistress about more literary sci-fi and its sales potential the other day, and was reminded of this when I heard the audio of a Coldplay concert last night.
My daughter had attended live and went gaga about how this was the best concert she had ever heard. Having listened to about 2 hours worth of Coldplay, I can hear why this band is popular. It’s definitely a cut above today’s pop music — which is, of course, damning with very faint praise. It also has a few clever harmonic touches — but they are added in, for my taste, homeopathic doses, and smothered in pop cheese and endlessly milked hooks. (I was actually surprised they had a live drummer: the drum parts are so monotonous to my ears that I was convinced they were using a drum machine with very good samples.)

But apparently, that is as much musical sophistication as you can add and keep a mainstream pop audience nowadays. Sgt. Pepper era Beatles, or ELO in their heyday, are far-out progressive rock in comparison — heck, so is even Pet Sounds by the Beach Boys! But here’s the point exactly: they know their market, and they produce exactly what the market wants. If they are at all disaffected musically, they are suffering all the way to the bank.

All this has a parallel in fiction. Allow me to explain.

In pure entertainment fiction, everything is secondary to “the meat and potatoes” of the genre: in military sci-fi or space opera, for example, those would be a strong, sweeping plot, protagonists you can root for, credible antagonists, lots of action, and the like.

And no, that does not mean “dumb” fiction: plots and characters can be very complex, and about certain special interests that are central to their chosen bailiwick, genre writers and their fans alike can be detailed and obsessive to the point of “weaponized autism”. So if, say, Larry Correia geeks out about guns, or David Weber about orbital mechanics, that is not just tolerated but expected. (Never mind the level of painstaking detail seen in police procedurals and the better techno thrillers.)

But for anybody who is well-read, the prose in many works of genre fiction can be irritatingly pedestrian, if not outright “dumbed-down”. This is especially true of the American market: a few recent contemporary romances I read for “market research” seemed to have been deliberately written at an 8th-grade reading level. British readers seem to expect somewhat more polished prose.

At the other extreme, in pure “literary fiction”, one can often be forgiven for assuming that entertaining the reader is an afterthought at best. Writers of such books are often academics or academic wannabes, and peer approval is more important to them than anybody actually reading their book for pleasure.

There are writers that are trying to steer a middle course: combine entertainment mainstays with prose that those who love the language for its own sake will find pleasant to read — and if some readers need to look up a word on their Kindles, well, so be it. Often such books have philosophical, sociological, and/or spiritual themes running through them. “Literary-friendly entertainment fiction”, if you like. Dave Freer and Brad Torgersen are examples in the sci-fi field. Yet discussions with, among others, our BbESM suggested that the market for “literary-friendly entertainment fiction” is limited.

The Freers and Torgersens (and up to a point, Lois McMaster Bujold) would be like progressive rock: music that tries to retain some of the accessibility and energy of rock and pop music while also seeking a broader musical horizon. Now the best bands in that genre — take Yes or ELP in their heyday, or Genesis before they turned pop, or Rush and Dream Theater in a somewhat harder vein — have rabid and faithful cult fan bases — but “cult” is the operative word. I am sure the three guys in Rush made a ton of money over the years by building up a like-minded audience and reliably delivering the goods to it — but aside from airplay for “Tom Sawyer” , “The Spirit of Radio”, or “Limelight”, their mainstream appeal is always going to be limited.

There are artists with “two-track” outputs: nice tuneful pop songs or rock anthems for the casual listener, and more profound work for the serious aficionado. There’s a couple Jimi Hendrix or Led Zeppelin songs that everybody knows, for instance, but they only scratch the surface of what these artists could do. Similarly, there are fiction writers who bankroll their more serious output with occasional crowd-pleaser offerings. Some people would call this “selling out”, but the “two-trackers” are basically following in the footsteps of Ludwig van Beethoven (!): he would write reams of bagatelles (short, inventive piano pieces playable by amateurs) and song arrangements to pay his bills and stave off the creditors, while he worked on the symphonies and piano sonatas that earned him his place in the pantheon of classical music.

Sarah Hoyt seeks a slightly different course (like her acknowledged literary guiding light, Robert A. Heinlein). Yes, there are philosophical elements and literary allusions in works like Darkship Revenge — and not always in small doses, mind you —  but they are blended in subtly, carefully mixed in with the “meat and potatoes”.  Similarly, Lois McMaster Bujold (possibly my favorite living writer in any genre) has deep psychological material in her novels, but makes sure not to skimp on the things that Baen’s target audience wants in a novel. In music, this would be a “progressive pop” approach, with Coldplay at the more timid edge and Steely Dan at the more daring edge.  (More experimental artists like Frank Zappa would actually derive quite a bit of their appeal from extra-musical factors, such as shockingly bawdy lyrics.)

What does all this mean for a writer? The answer will, of course, be different for those trying to make a partial or complete living off our pens, and for those of us for whom fiction writing is a labor of love rather than an income stream. Robert Heinlein used to quip that his favorite five words in the English language were “pay to the order of”, and until late in his career made sure to write books that are easy to read on the surface — but that reveal several layers when read in depth.

The Writer in Black

A little bit late today compared to when I usually post–not that there’s a set schedule.  Had to pick up my wife and daughter from the airport.

On another Social Media platform (I saw it on FaceBook, but it was copied from elsewhere) the claim was made:

The F-35 fighter jet budget is set to exceed a total of $406 billion.  Remember that when they say single-payer is too expensive.

Let’s run with that, shall we?  First off, that budget is over ten years.  So that would be $40.6 billion a year on average.  Population of the US, as of this writing is estimated (US Census Bureau) at 325,428,250 (it will be higher by the time you look at it, if you do).  Let’s just say 325 million.  That means the F-35 budget, if the project were completely abandoned and all the money shifted to health care, would…

Via “masgramondou”, comes a mindblowing story. Sure, it’s VICE, so full of SJW virtue signaling and hand-wringing. But in a nutshell: there are lawyers for illegal immigrants who are actively trying to get their clients incarcerated at Riker’s Island in order to avoid deportation.

Let that sink in. They would rather sit in jail in the USA than be free outside the USA. Only in America, folks.

A wonderful sesquicentennial Canada Day to all my Canadian readers! I hope the fuss and furor out of Ottawa doesn’t interrupt your enjoyment of the weekend and the celebration. 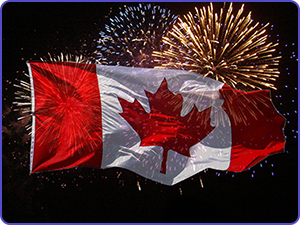 Remember, Canada is older than Germany! (By four years, but that still counts).

Three cheers for the Red, White, and Red! Fireworks on Parliament Hill.