A short post today, as the day job is keeping me busy.

(1) Today the results of the Phase 3 remdesivir trial were released. (I previously discussed its mechanism of action here: in brief, it’s a nucleoside analog that interferes with viral RNA copying by acting as an “imposter letter” in the RNA genetic code and causing further copying to break off.)

Again, as with prior trials, we see that it’s not a “magic bullet” drug, but clearly has a therapeutic advantage  in patients with moderate disease (signs of pneumonia, but don’t yet need oxygen). The trial used almost 600 patients, divided into three roughly equal groups: (a) standard of care (SOC) + 5-day remdesivir; (b) SOC + 10-day remdesivir; (c) SOC only (control group). In the table below, percentages are given in parentheses: 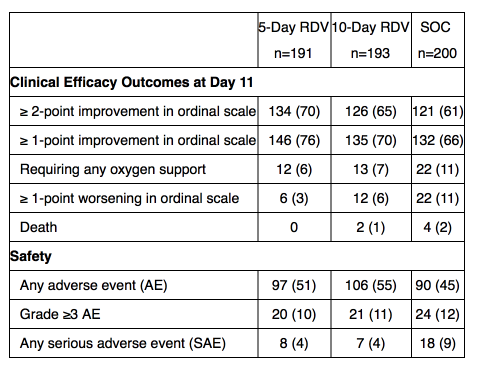 The “ordinal scale” is an ad hoc 7-point scale ranging from hospital discharge on one end to death on the other end. In the 5-day regimen (which I read between the lines uses twice the dose for half the time), about 10% more patients see an improvement, and 8% fewer patients see a worsening from baseline than with SOC. No patients on the 5-day regime died (compared to four with SOC), but we are in “statistics of small numbers” territory.

As for drug side effects (“AE”), there are about 6% more than with standard care, but actually fewer serious side effects.

Additional Phase 3 trials in severe and moderate disease are in progress in various countries. The drug is currently approved in Japan and under FDA emergency authorization in the US.

In this video, Dr. Seheult talks about masks and about a database for vaccine clinical trials.