As it stands, while Trump has won a resounding victory in the Electoral College (on track for 306 electoral votes vs. 232), HRC is on track to win a slim plurality (about .5%) of the popular vote. This will be the 5th time in US history that this happened, and the 2nd in my lifetime.

Some now decry the very existence of the electoral college. The reasons for its creation by the Founding Fathers — in a federal republic wary of ‘dictatorship by the 51%’ — have been discussed at length by others. I will confine myself to some practical observations.

1. Any ‘first-past-the-post’ system (FPTP) system can produce outcomes like this: theoretically, it is possible for the Tories or Labour in the UK to win a plurality of the popular vote and a minority of House of Commons seats. [There is no direct election of the Prime Minister in the UK.] As a concrete example of what happens in another FPTP system, the following graph illustrates the actual difference between percentages of the popular vote and of the House of Commons in the 2015 UK Parliamentary Election: the inner piechart represents popular vote, the outer piechart elected MPs. 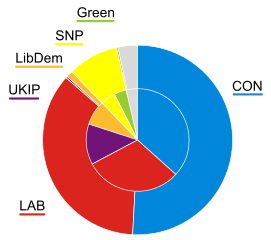 According to Duverger’s Law in political science, FPTP systems tend to produce two-party regimes. (In turn, of course, both major parties tend to become coalitions of groups that in a proportional representation system would set up shop for themselves.)

Currently, the US Presidential Election is effectively a variation on the above piechart, with 538 electors getting appointed across fifty-something constituencies — 48 states, DC, and the peculiar arrangements for the two remaining states of ME and NE.

2. Of course, both parties adjusted their campaign strategies to the current system, focusing their efforts on battleground states and spending fairly little effort on states that are solidly in their or the opponent’s camp. In a competition for the popular vote, both sides would have run very different campaigns, with much more of a focus on CA, NY, and TX, and less on small-population battleground states like New Hampshire.

Conversely, many people would change their “tactical voting” habits in a popular-vote system. Many who live in “safe” blue or red states (we’re registered in TX) but are unhappy with both major candidates now will stay home or vote third party (in this cycle, most such votes went to the Libertarian ticket) or even for joke candidates like Vermin Supreme. On the other hand, if they are living in battleground states, they feel some pressure  to not “waste their vote” on a third-party contender, and thus hold their nose and vote for the lesser of two evils. In a single-district popular vote election, they would have no such incentive.

Methinks, a popular vote race would on balance produce a much larger vote for 3rd-party candidates (Libertarian, Green, hardcore Conservative,…) at the expense of the two major parties. Indeed, somebody who fails to obtain the D or R  nomination might be more inclined to run as an independent.

It is not at all clear that HRC supporters would get the outcome they desired in a declared popular-vote election (as distinct from retroactively processing a FPTP election outcome as PV). How would a PV election between HRC, Bernie Sanders running as a Socialist or Independent, Trump, and Gary Johnson (plus lesser candidates) turn out? It’s a hypothetical, but to say election of HRC would not have been assured would be an understatement.

NB: France, where the President holds power comparable to that of the POTUS, in fact instituted a runoff election between the two top vote getters, two weeks after the initial election. The contender who places third in the initial round often becomes something of a kingmaker by endorsing one or the other of the runoff candidates.

3. Moreover, if we’d start electing the POTUS by popular vote totals, why stop there? Why not go all the way to proportional representation at the federal level? Elect the House by popular vote tally? Or, failing that, at least by State rather than congressional district? This would put an end to gerrymandered districts, but also dilute the importance of the two major “uniparties” as smaller parties would suddenly find themselves holding the balance of power in the House. Some of us would even applaud this; on the other hand, parliamentarians in such a system are much less personally beholden to their constituents.

Summarizing: those HRC supporters, Trump haters, partisan Democrats, and (but I repeat myself) MSM journalists who suddenly have discovered the virtues of the popular vote might be singing a quite different tune if this were actually implemented systematically, rather than conveniently applied ex post facto to the present unpalatable outcome.

One thought on “Some thoughts on electoral college vs. popular vote election”